Pizza off the Men's Room Floor 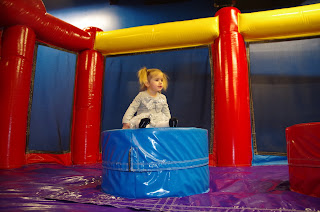 On a cold January day in 2015, I faced the most dire challenge of my parenting life.

I was flying solo with our two girls, at the time aged 2 and 4.  We had just attended a birthday party for my four year old's best friend at the indoor bouncy house emporium known as Pump It Up.  It was our first time there, and both the girls went absolutely bugnuts jumping up and down and laughing hysterically. I eagerly kicked off my shoes and climbed in after them.  "The little one needs me in here so that the big kids don't crash into her," I lied. 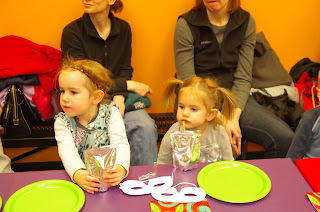 As everyone with small children know, however, their schedules are a series of inexorable and relentless wheels and pulleys.  If you miss nap time, your children will be horrors.  To avoid missing nap time, you have to be home by X o'clock.  Which means you have to leave by X minus 30. Which means that you have to start extracting yourself from the fun situation at about X minus 40, and leave yourself some air in the schedule if your kids are having a super good time. 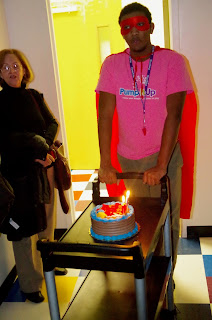 Side note: The institution of the "goody bag" at parties is not, in fact, just an elaborate and nefarious conspiracy by Jack Maa and Alibaba to fill your house with cheap plastic crap.  Goody Bags exist so parents can bribe their kids into leaving, pure and simple. We call the process of untangling ourselves from a fun and exciting situation  "Exfiltration," a term that commandos and special forces types use for 'leaving a place or situation that is about become very uncomfortable, sometimes while being shot at with rocket propelled grenades."

The 4 year old was having too much fun to leave easily.  She was used up and didn't know it.  She had been bouncing for hours, and was now dealing with a sugar crash on top of it.  She resisted all my blandishments, and even the goody bag wasn't enough to entice her into a clean get away.  She wanted to eat more pizza.

"How about if you bring a piece to eat on the way home?" I suggested, beginning to grow desperate.  This offer meant breaking a long standing precedent against messy food in the car, but the 2 year old's nap window was closing rapidly.  At this point my hopes were shifting to a car nap on the ride home.

But now the 2 year old needed a change. Burdened by winter coats, goody bags, and a diaper bag crammed with enough equipment for an ascent of the Lhotse Face, I staggered into the men's room, firmly commanding my 4 year old not to touch anything.  Thank god there was a changing table. It was creaky and tippy, but it was there.  As I plopped my 2 year old down, it groaned and sagged precipitously, but held.

As I started changing the diaper on my squirmy, cake and ice cream filled toddler, the table gradually  inclined about 15 degrees towards me, which meant that my daughter threatened to roll off onto the floor with every kick and thrash, of which their were plenty.

There's a certain unmistakable character to the sound of pizza hitting tile floor, toppings down.  It's both wet and percussive.

I whirled around to look at the 4 year old, keeping one hand on the toddler and another on the poopy diaper.  Sure enough, she had picked up the piece of pizza and was lifting it towards her mouth.

"NO!" I instructed firmly.  "Do not eat that!"
HOWLS of protest.  She WANTED that pizza.  She wanted it NOW!

"I'm sorry, honey, you have to throw it away.  You HAVE to.  I'm so very sorry" I would have promised her a replacement piece, but I'd already seen the staff cleaning up and heading to the dumpster with all the extra pizza boxes.

The 4 year old screamed with fury, working into a full DEFCON 1 meltdown.  Tears streamed down her face in rivulets, cutting paths through the dried ice cream and frosting on her cheeks.  Her howls threatened to peel the faded paint off the walls of the rest room.

Now the 2 year old was crying and complaining from the changing table.  I tried to keep one hand on her to keep her from sliding off the increasingly precarious changing table while performing the necessary ablutions, all while the 4 year old shrieked like a miniature Lear cursing the storm.

I became increasingly worried that the sounds coming from the men's room were going to cause the staff to come charging in, possibly with police accompaniment, to interrupt the triple homicide that was obviously taking place.

The 4 year old clung to the befouled piece of pizza as if it were the last life vest on the Titanic.  Her chest heaved as she hate-sobbed.

I had to dispose of the loaded diaper.  Holding my tantruming younger daughter in place with one hand, with the other hand  I wadded all the used wipes into the diaper and used the tabs to secure it into a small yet stinky self-contained crap grenade.  I hurled it in the general direction of the trash can, all as the 4 year old's screams built towards a crescendo.

"All this could be averted," I thought.  "I could make it all better if I just tell her she can eat the pizza off the men's room floor."  Thoughts of the hygiene theory and the five second rule beckoned seductively in my head.  In my extremis, I was tempted.  I was very sorely tempted.

I stayed strong.  With one child now freshly diapered and wearing pants, I snatched the tainted piece of pepperoni pizza from the four year old.  Before my resolve could weaken, I hurled it into the trash.

The screams of outrage intensified, which I would not have thought possible just a moment before.  It was time to flee, quickly and cowardly.  I shoved the goodie bags and coats into my armpits, slung the diaper bag with its 40 pounds of equipment over my shoulder, grabbed one child in each arm, and mandhandled them bodily out the door.  Though it was about 25 degrees out, I didn't even bother trying to get the girls into their winter gear.  The rage-heat generated by their twin tantrums was coming off them in palpable waves.

I may have never been so thankful for the remote door opening feature on our minivan.  I crammed each child into a car seat, hurled the mass of coats, goody bag, and diaper bag into the back, and sank into the driver's seat, shaking.

Later I Facebooked about this, describing the dilemma I'd been in.  The comments bifurcated neatly.

"OMG," said some.  "You weren't SERIOUSLY considering letting her eat it, were you? In fact, why did you even let her bring food into the men's room?"  That came from non-parents.

All the parents in my thread just said, "Been there."

Epilogue: The four year old calmed town relatively quickly on the ride home.  The two year old conked out instantly for a 45 minute car nap. This left her at a Nap Deficit for the day, but fortunately no one was worse the wear for it.  Today, my children don't even remember this incident, but I will carry the psychic scars for a lifetime.